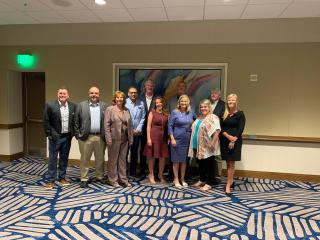 PMS company Visual Matrix convened CIOs from hotel brands, ownership and management companies and tech providers to kick off HITEC 2022 with a discussion of the future of the PMS and the critical role of innovation in its evolution.

Those in attendance at the June 27 roundtable in Orlando included:

Moderator Flo Lugli opened the session by asking what the biggest obstacles are to a truly unified property management system for hotels, and whether the rapid industry change during and after the pandemic has accelerated or hindered progress toward that goal.

The group agreed that the industry is at a unique moment, which shines a spotlight on the shortcomings of present technologies – but also provides an opportunity for out of the box thinking to innovate new approaches.

Digging into the brand perspective, Red Roof CIO Ted Hutchins reflected on the complexities of organizing and executing a property management strategy for brands in the post-pandemic era.  The complexity stems at least in part from the multiplicity of stakeholders involved in the process – including franchise owners, brand leaders, technology providers and other innovators. Unless there is a way to get all those parties speaking to one another to pursue agreed to goals and “must-haves,” progress is likely to remain limited.

Visual Matrix CEO Georgine Muntz offered a new paradigm for thinking about the interaction of the diverse stakeholder group, suggesting that tech companies should view themselves as investors and joint venture partners rather than technology providers. Establishing the common perspective of JV partnership bridges the gap between “provider and user,” and can lead to the establishment of concrete benchmarks that partners can work together toward achieving.

Asian American Hotel Owners Association (AAHOA) Vice Chair Bharat Patel spoke at length about the challenge of bringing technology innovation to the property level. It’s not just about achieving acceptable goals for innovation industrywide, the benchmarks must mirror and help address the concrete needs of business owners. The situation is made even more complex by the fast-evolving needs of guests, which are radically shaping and re-shaping the demands on franchisees for running successful properties and maintaining profitability. The tech in question is not only the core PMS, but all functionalities surrounding it - - including payment systems, check in/check out software, and more.

First Hospitality’s Jason Segrebrecht suggested the challenges are even more complex than that, providing the example of a boutique property the company attempted to switch over to a new PMS environment after an acquisition. Among other problems, “there is no one to answer the phone,” resulting in delays in cutting over systems and delays that can result in lost revenue.

The group agreed that service issues on the part of tech providers can be as much to blame for holding hotels back as the native technical issues that make tech innovation challenging.

The group recommended creating new service and technical standards not just among hotels but among the providers themselves.

Muntz suggested that collaboration around those new standards is not only possible, but critically necessary: “We need to all come together to make progress on the development of the whole tech stack, for the benefit of everyone in the hotel value chain.”

Mutnz cited the example of the auto finance industry, where she led a start up that innovated solutions to overcome challenges similar to the PMS bottlenecks that hold back hotels: “An open API environment is absolutely critical, alongside a focus on cost and cooperation along stakeholders – I really believe that collaboration is the key.”

Reviewing the data and looking ahead

IDeaS Vice President Mike Chuma was asked about the complex data environment underlying the need for collaboration and sharing information.

“It’s a complicated environment where partners need to come together at every level to make progress,” he said.

Chuma suggested thinking about the environment as a multi-tiered operating playing field, almost like playing chess on a 4-dimensional board: PMS providers, data suppliers, RMS companies and others need to toggle among layers to achieve optimum new technical and service protocols for hotels.

Red Roof’s Hutchins agreed, saying that the complexity in systems is at the root of how brands work. “Until we get to a truly multi-host world, progress will be a challenge. And in a multi host you will do it standardized. That's how airlines geo there. And that is the future for hotels as well.”

The group agreed that even in a multi-tenant environment, the human dimension is critical.

Chuma said, “We need a pretty heavy learning system behind technology evolution, because humans will always be pretty critical of a system. The industry needs to get to a point where self regulation will wane out and they can trust that machine. Otherwise adoption rates drop and you get negative NPS levels. As providers and as brands, we need to engage customers as peers in a different way. Have real conversations about the direction forward.”

Lugli concluded the session by asking what the group thinks will be “top of agenda” when the industry convenes for HITEC 2023 in Toronto.

Everyone agreed that PMS challenges are not going away any time soon – but that there seems to be a new spirit of urgency behind bringing together diverse stakeholders to address the core issues.

Owners, operators and providers around the table looked forward to meeting a year on to assess progress.