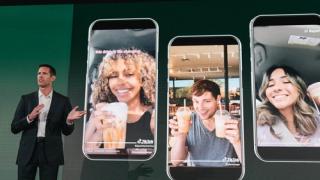 Starbucks revealed more details of its roadmap to reinvention during its biennial Investor Day in Seattle on September 13.

Starbucks teased its reinvention plan during its fiscal Q3 earnings call, where it revealed the "five major strategic shifts to pivot the U.S. business in a new direction."

"The cornerstone" is "more efficient equipment," Culver explained. "We already made investments in the areas of new machines and introduced those across the U.S." including new warming ovens, a new proprietary cold brew system, coffee brewer, etc.

Stores that are already using this next-gen equipment are seeing significant time savings in the drive-thru. "Through the course of this year and early fiscal year '23, we will have this equipment fully rolled out across our entire U.S. portfolio," Culver said.

The Need for Speed

The majority of Starbucks customers are Millennials and Gen Zers.  In fact, Gen Z has the “highest brand love for Starbucks,” CMO Brady Brewer revealed.  And that love is fueled by the Starbucks’ ability to personalize their drinks. (Check out  #STARBUCKSDRINKS on TikTok, Instagram and other social media.)

“Cold customized coffee is where the customer is going,” Brewer said.

But these customized orders add complexity and time to each order and impact the employee experience.

To help improve the employee experience, reduce customer wait times and increase throughput, Starbucks demoed its Siren System. Investor Day attendees witnessed how the new system impacts the crafting of a cold beverage:  vs. the old work line, there was a 50-second time savings on a mocha frappuccino made with the newly redesigned cold beverage station that includes an improved workflow and fewer repetitive actions for employees.

Starbucks also touted the launch of Clover Vertica. Using proprietary Clover technology, Clover Vertica makes a freshly ground, freshly brewed cup of hot coffee in about 30 seconds. Starbucks has already begun rolling out this equipment to stores and expects it will be fully deployed to all U.S. stores in the next three years.

For fiscal 2023, Starbucks has identified a number of near-term solutions that will be implemented to ensure an improved employee, or partner, experience: 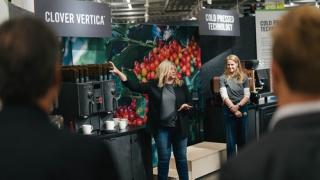 Starbucks is rolling out Clover Vertica and updated equipment to U.S. stores.

“In 2008, the bloom was off the rose. Everybody was counting us for dead,” recalled Schwartz. “Believe it or not, we did our best work. The level of innovation was extraordinary.  What we did in 2008 was literally transform the company.”

Back 2008, Starbucks rolled out the first iteration of its loyalty program – which today has 27 million U.S. members and 58 million worldwide. Also born in 2008, the roaster’s CPG business (Pike’s Place bagged coffee and Frappuccino ready to drink), and it acquired the coffee brewer and brand Clover.

(This led to the latest version, Clover Vertica, which is being rolled out nationally. This single-cup brewer will enable high quality coffee on demand in about 30 seconds, leading to a “significant savings in waste” to boot, Schultz said.

The reinvention plan also leverages automation to help simplify tasks and remove complexity in the supply chain. “Automation has helped us to reduce the time spent by partners doing manual counting of SKUs on a daily basis,” explained Culver. “We eliminated this for food as well as for merchandise.”

Earlier this week Starbucks shared how it is integrating NFTs with its loyalty program to create an accessible Web3 community that will enable new ways to engage with members and employees.

Brewer shared some of the company’s plans to elevate the customer experience. "No longer constrained by the four walls of the store,” Brewer stressed the pivotal role that Starbucks fills for many of its loyal customers, outside of their homes and workplaces. Starbucks is the “third place connection."

“We’re serving customers across all of our channels. We’re doing that  through all our different formats.  We connect with customers in their cars. We are connecting with our customers on their doorsteps (through delivery), in digital channels, and we are building loyalty at Starbucks far beyond anything anyone thought possible.”  Starbucks reaches 75 million customers each month in the USA, “and that flywheel begins with that connection,” Brewer added.  “It is our differentiation and provides a scale and strength.”

The Reinvention is beginning with Starbucks 9,000+ U.S. company-operated stores. Starbucks then plans to rapidly implement the most effective and scalable best practices to its other U.S. and global stores. 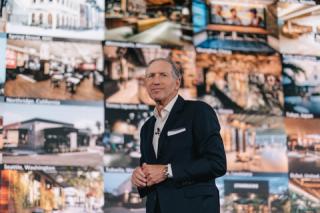